Every year since 2010 I have used data science to predict the results of the NCAA Men’s Basketball Tournament. In this post I will describe the methodology that I used to create my picks (full bracket here). The model has Virginia, Michigan, Villanova, and Michigan State in the Final Four with Virginia defeating Villanova in the championship game:

Here are my ground rules:

I used a combination of game-by-game results and team metrics from 2003-2017 to build the features in my model. Here is a summary:

I also performed some post-processing:

The model predicts the probability one team defeats another, for all pairs of teams in the tournament. The model is implemented in Python and uses logistic regression. The model usually performs well. Let’s see how it does this year!

Every year since 2010 I have used analytics to predict the results of the NCAA Men’s Basketball Tournament. I missed the boat on posting the model prior to the start of this year’s tournament. However, I did build and run a model, and I did submit picks based on the results. Here are my model’s picks – as I write this (before the Final Four) these picks are better than 88% of those submitted to ESPN.

Here are the ground rules I set for myself:

I used a combination of game-by-game results and team metrics from 2003-2016 to build the features in my model. Here is a summary:

I also performed some post-processing:

I submitted the model to the Kaggle NCAA competition, which asks for win probabilities for all possible tourney games, where submissions are scored by evaluating the log-loss of actual results and predictions. This naturally suggests logistic regression, which I used. I also built a fancy pants neural network model using Keras (which means to run my code you’ll need to get TensorFlow and Keras in addition to the usual Anaconda packages). Keras produces slightly better results in the log-loss sense. Both models predict something like 78% of past NCAA tournament games correctly.

There are a couple of obvious problems with the model:

I will create a github repo for this code…sometime. For now, you can look at the code and raw data files here. The code is in ncaa.py.

I have downloaded stats for the recently completed 2015 NFL regular season from yahoo.com, cleaned the data, and saved the data in CSV format. The files are located here. If you prefer a github repository, check here. The column headers should be self-explanatory.

You will find seven CSV files, which you can open in Excel or Google Sheets:

Every year since 2010 I have used analytics to make my NCAA picks. Here is a link to the picks made by my model [PDF]: the projected Final Four is Villanova, Duke, North Carolina, and Virginia with Villanova defeating North Carolina in the final. (I think my model likes Virginia too much, by the way.)

Here’s how these selections were made. First, the ground rules I set for myself:

The win probability model accounts for margin of victory and serves as preprocessing for step 2. I added a couple of other features to make the model more accurate:

The eigenvalue centrality model requires game-by-game results. I pulled four years of game results for all divisions from masseyratings.com (holla!) and saved them as CSV. You can get all the data here. It sounds complicated, but it’s not (otherwise I wouldn’t do it) – the model requires less than 200 lines of Python, also available here. (The code is poor quality.)

How do I know these picks aren’t crap? I don’t. The future is uncertain. But, I did a little bit of backtesting. I trained the model using different “win probability” and “recency” parameters on the 2013-2015 seasons, selecting the combination of parameters that correctly predicted the highest percentage of NCAA tournament games during those seasons, getting approximately 68% of those games right. I don’t know if that’s good, but it seems to be better than applying either the eigenvalue centrality model or the win probability model separately.

In general, picks produced by my models rank in the upper quartile in pools that I enter. I hope that’s the case this year too.

I have downloaded stats for the recently completed 2014 NFL regular season from yahoo.com, cleaned the data, and saved in Excel and CSV formats. The files are located here. The column headers should be self-explanatory.

The Excel workbook has seven worksheets:

The same folder also has separate CSV files for each position, which may be more helpful if you are a coder.

Over the weekend I created a model in Excel to predict the 2014-2015 NBA season. The model simulates the full 82-game schedule, using player Win Shares from the 2013-2014 season to estimate the strength of each team, accounting for roster changes. This model is not perfect, or even particularly sophisticated, but it is interesting. Here are the model’s predictions as of 10/15/2014, with projected playoff teams in bold.

You can download my full spreadsheet here. It’s complicated but not impossible to follow. It does not exactly match the results presented above because I have a messier version that accounts for recent injuries, e.g. Kevin Durant.

The Cavs, Spurs, and Clips are the favorites to win the title in this model (a previous version of this model also had the Thunder in this class, but Kevin Durant is now injured). Comparing these estimates to over-unders in Vegas, the biggest differences are Brooklyn (lower), Indiana (higher), Memphis (lower), Minnesota (higher), New Orleans (lower), Phoenix (higher). If you take the time to read through the methodology at the end of this post, you may be able to see why some of these differences exist. Some are probably reasonable, others may not be.

Many of the ingredients for this model were presented in my previous three posts, where I compiled game-by-game results for the 2013-2014 season, built a simple model to predict rookie performance, and tracked roster changes. Now the task is pretty simple: estimate the strength of each team, figure out how unpredictable games are, and then simulate the season using the strengths, accounting for uncertainty. At the end I discuss weaknesses of this model, which if you are a glass-half-full type of person also suggest areas for improvement.

Step 1: Estimate the strength of each team. Team strengths are estimated by adding up the 2013-2014 Win Shares for the top twelve players on each NBA team. In my last post I gave a spreadsheet with Win Shares for all 2013-2014 NBA players based on data from basketball-reference.com. I made three adjustments to this data for the purposes of this analysis:

Step 2: Estimate the unpredictability of game results. Most of the time, a good team will beat a bad team. Most of the time. Can we quantify this more precisely? Sure. From a previous post, I determined that home court advantage is approximately 2.6 points per game. We also found that although the difference in total season wins is a predictor of who will win in a matchup between two teams, it is a rather weak predictor. in other words, bad teams beat good teams quite often, especially at home. For our prediction model we make another simple assumption: every team’s performance over the course of the season varies according to a normal distribution, with the mean of this distribution corresponding to their overall team strength.

It turns out that the resulting estimate does a very good job of matching 2013-2014 results:

Step 3: Determine win totals for the 2014-2015 season. I obtained the 2014-2015 schedule for $5 from nbastuffer.com. Using this schedule, I calculated win probabilities for each game using the team strengths in Step 1 and the standard deviation in Step 2. If I add up the totals for each team, I get their estimated win totals. Voila! Since the prediction is created by looking at each game on the schedule, we also get home and away records, in conference records, and so on. It’s also easy to update the estimate during the season as games are played, players are traded or injured, and so on.

Why this model stinks. The biggest virtue of this model is that it was easy to build. I can think of at least ten potential shortcomings with this model:

It will be interesting to see how this model performs, in spite of its shortcomings.

I have downloaded statistics for all NBA players from basketball-reference.com, and accounted for roster changes (as of Sunday, October 5).

The Tm2013 column is a three-letter abbreviation for the player’s 2013-2014 team. For players that played on two or more teams, the entry represents the team for which the player played the most minutes. The Tm2014 is the player’s current NBA team (as of Sunday, October 5) according to nba.com. Rookies are not included in this spreadsheet.

If you’ve read my previous two posts, you may have guessed that I am leading up to a prediction of the upcoming 2014-2015 NBA season. You’d be correct – I will post my model and predictions tomorrow.

In the meantime, you can actually use the spreadsheet above to create a very crude prediction. The last column in this spreadsheet is “win shares”. If you create a pivot table based on Tm2014 and Win Shares, you get the sum of player win shares for current rosters – a crude measure of team strength. Here is what that table looks like:

I can think of at least five weaknesses in this “pivot table model”. Can you?

Nate Silver (and others) have tracked how NBA draft position relates to total career performance, see for example this article. But what about first-year performance?

I pulled two sets of data from basketball-reference.com to answer this question:

I then merged them using Power Query and then created a pivot table to calculate the average number of rookie season “win shares” by draft position. You can download my Excel workbook here. Here is what I found:

The first pick in the draft averages nearly five Win Shares in his rookie season, and while the pattern is irregular, win shares decrease as we get deeper into the draft (duh). (The blip at the end is due to Isaiah Thomas, drafted by the Kings who promptly screwed up by letting him go.) I have drawn a logarithmic trendline which fits the data not-to-shabbily: R^2 of 0.7397. Obviously we could do much better if we considered additional factors related to the player (such as their college performance) and team (the strength of teammates playing the same position, who will compete with the rookie for playing time). Here are the averages for the first 30 draft positions:

The NBA preseason is in full swing! For those of you who like to fool around with data, I have prepared a CSV file with game-by-game results for the 2013-2014 season. The data was downloaded from basketball-reference.com using Power Query and cleaned up (see below).

The format is simple:

I include the number of wins for each team in the files because I wanted to see how often good teams beat bad teams. The diagram below plots the difference in total wins for teams against the margin of victory. I have used the trendline feature in Excel to verify that while (by definition) good teams beat bad ones frequently, the variability is quite high. Notice the R^2 value. 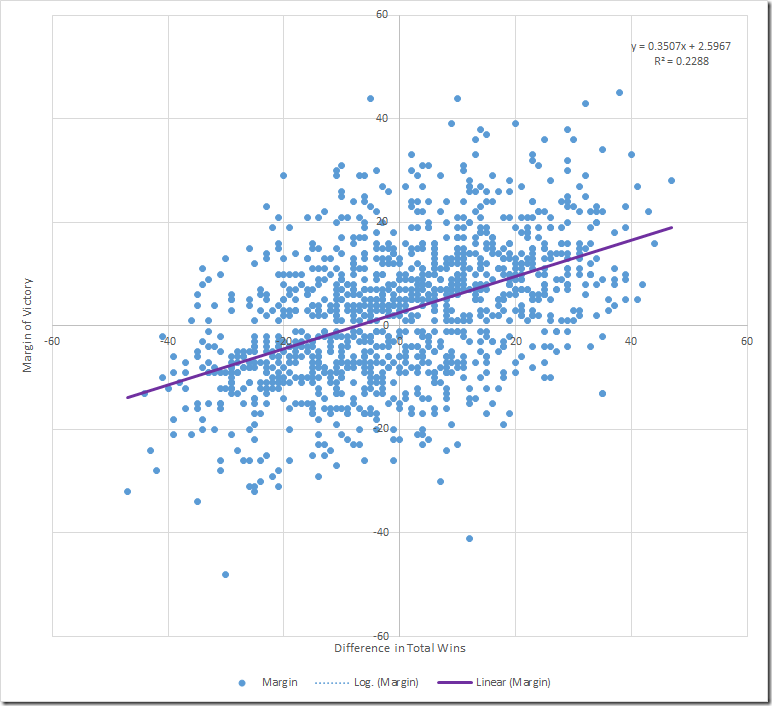 The intercept for the trendline is 2.5967, which represents the home court advantage in points. In a future post I hope to use this data to make some predictions about the upcoming NBA season.

I have prepared fantasy football ratings for the 2014 NFL season based on the data from last year’s season. I hope you will find them useful! You can download the ratings here.

There are several weaknesses:

You may want to adjust the rankings accordingly. Here are the top 25 rated players (again, the full ratings are here):

FPOR is the adjusted, cross-position score described earlier. RawPts is simply 2013 fantasy points. AdjPts are the points once touchdowns have been “corrected” and injuries accounted for.

We will see how the ratings work out! If I have time I will post a retrospective once the season is done.