I have created a simulation model in Microsoft Excel using Frontline Systems’ Analytic Solver Platform to predict the 2014 NCAA Tournament using the technique I described in my previous post.

Once you’ve installed the trial, open the spreadsheet. You’ll see a filled-out bracket in the “Bracket” worksheet: 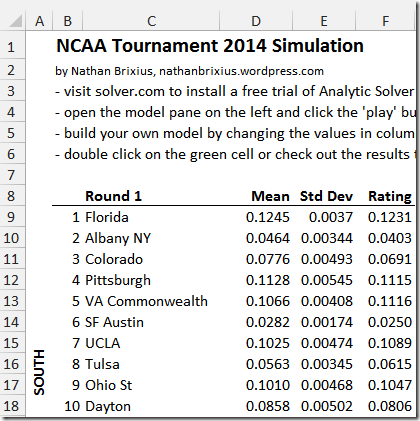 Winners are determined by comparing the ratings of each time, using Excel formulas. Basically…a bunch of IF statements:

The magic of simulation is that it accounts for uncertainty in the assumptions we make. In this case, the uncertainty is my crazy rating system: it might be wrong. So instead of a single number that represents the strength of, say, Florida, we actually have a range of possible ratings based on a probability distribution. I have entered these probability distributions for the ratings for each team in column F. Double click on cell F9 (Florida’s rating), and you can see the range of ratings that the simulation considers:

The peak of the bell curve (normal) distribution is at 0.1245, the rating calculated in my previous post. Analytic Solver Platform samples different values from this distribution (and the other 63 teams), producing slightly different ratings, over and over again. As the ratings jiggle around for different trials, different teams win games and there are different champions for these simulated tournaments. In fact, if you hit F9 (or the “Calculate Now” button in the ribbon), you can see that all of the ratings change and the NCAA champion in cell Y14 sometimes changes from Virginia to Florida to Duke and so on.

Click the “play” button on the right hand side to simulate the NCAA tournament 10,000 times:

Now move over to the Results worksheet. In columns A and B you see the number of times each team won the simulated tournament (the sum of column B adds up to 10,000): 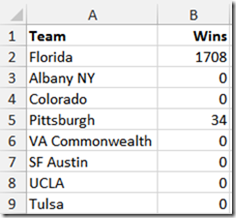 There is a pivot table in columns E and F that summarizes the results. Right click to Refresh it, and the nifty chart below: 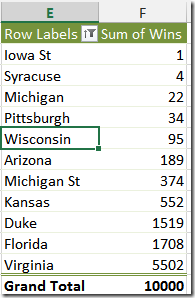 We see that even though Virginia is predicted to be the most likely winner, Florida and Duke are also frequent winners.

What’s nice about the spreadsheet is that you can change it to do your own simulations. Change the values in columns D and E in the Bracket worksheet to incorporate your own rating system and see who your model predicts will win. The simulation only scratches the surface of what Analytic Solver Platform can do. Go crazy with correlated distributions (perhaps by conference?) or even simulation-optimization models to tune your model. Have fun.